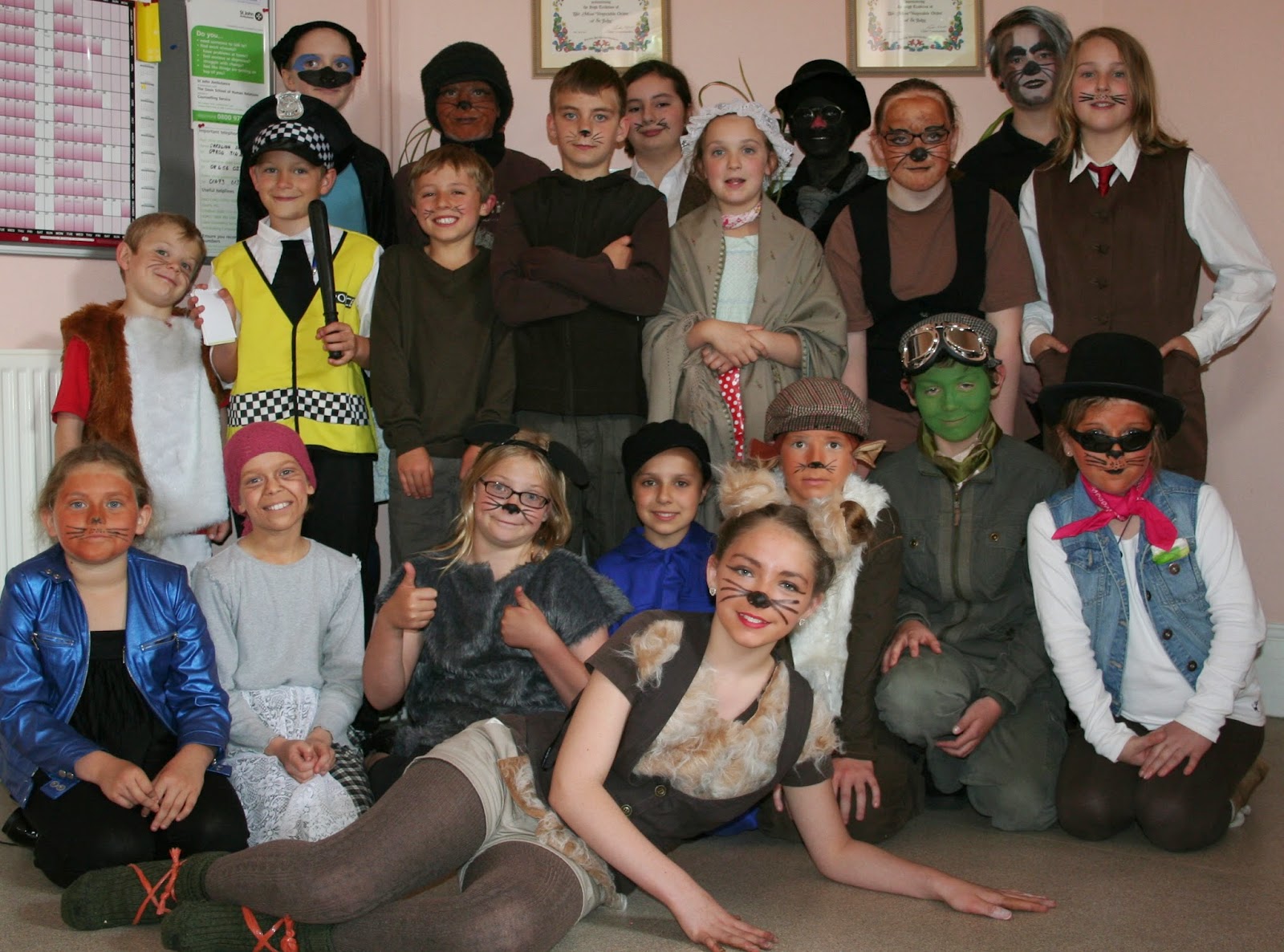 Fusion Musical Theatre is a friendly, informal and musically based amateur dramatics group for children, located near Beccles, Suffolk. Fusion's cast are currently aged from 6 - 14 years. All who share a love of music are invited to become involved, no experience necessary. There are no auditions and children are given the space and encouragement to grow in confidence and musical ability. They are offered the opportunity to exceed even their own expectations, but not expected to 'perform' in any area that they do not enjoy. A Fusion term lasts for 10 weeks, there are three terms a year and each culminates in two performances.

Fusion has a local following and we aim to entertain and delight our audiences who include local community groups such as the elderly, learning disabled, school children and church groups.

From December 2011 we began to support the Bulgarian Orphans Fund using donations from audiences at our free performances. Cast have begun to correspond directly with the Bulgarian children. We have raised over £3000 for BOF.

All performances are free, raising money for a different charities. Every production has built on the success of the last and each one is an inspiring and energetic fusion of the individual personalities and talents of those children taking part. It is heartening to see the pleasure that the children get from interacting with the audience and how proud they are to be proving what they are capable of in front of their families, friends and community. All productions include lots of group singing, two part harmony, solo opportunities, instrumental parts for those who play their own instrument and are adapted to suit the individuals taking part.


Fusion was created in the Summer of 2009, its first performance was 'Ocean Commotion', performed in Burgh St Peter and featuring a 10foot mod-rock blue whale, built by one of the parents! Our second production was a musical nativity called 'The Good Shepherd'. This was performed in two local churches and at the Sunday Club for local elderly people. Our first performance in St Mary's Church, Burgh St Peter Staithe was challenged by severe weather conditions resulting in only two thirds of the cast being present for this first performance. However, the able cast proved that 'the show must go on' and despite Joseph being left holding the baby, they achieved a commendable performance, improvising with no Mary, a shepherd and two kings missing! The brave audience who had ventured out in icy conditions were rewarded with mulled wine and mince pies after the performance and a good time was had by all. £270 was raised for The Mayor's Appeal, going to the Army, Navy and Air Cadets in Beccles area.


In May 2010 Fusion performed what was our most ambitious production so far; an adaptation of Shakespeare's 'The Tempest'. This included 16 children and was an hour long performance requiring the children to learn lots of lines, nine songs and dance moves choreographed by members of the cast. The children were accompanied by piano, guitar and drums. Performances took place in the Blyburgate Hall, St Benet's Church Hall and at the Waveney Community Centre in Beccles. We raised £326 for BLISS charity for premature babies.

A local School Governor who came to watch the final performance of 'The Tempest' said: "I was not sure what to expect, and was afraid it was just going to be another school type production, stilted and trading on the cuteness of kids. Well it was not that at all, it was exciting, touch of humour and very entertaining (as Shakespeare is meant to be)."

On 17th and 18th July 2010 Fusion performed 'Samson and Delilah' at the Blyburgate Hall and again St Benet's Church Hall. This was an entertaining and comical version of the biblical story infused with feather boas and a very hairy wig! The St Benet's performance was attended by the Deputy Mayor of Beccles, Alan Thwaites and his family and raised £150 for the Mayor's Appeal which supports the Scout and Guide groups in Beccles.

More recently the cast of 16 children performed 'King of Kings': a musical nativity in St Benet's Church, Beccles. Prior to the public performance on 22nd December 2010, Fusion performed for the Sunday Club Christmas Party at the Waveney Centre and for children from St Benet's School and The Old School, Henstead. these performances raised £200 for the Mayor's Appeal in Beccles.


One audience member at the Waveney Centre was so impressed, he later presented Fusion with a cheque of £100, raised through Charity Bingo at the Blyburgate Hall, to go towards new equipment for the next term. Rodney Scott commented on how impressed he was at the children's ability to perform for one hour with such enthusiasm and stamina and how entertaining the performance was.

In June 2011 Fusion members performed 'Troy' : a musical version of Paris of Troy. This included some lively dances using streamers as swords. The children contributed to all choreography in this show. We performed to the Waveney Enterprise group in Beccles, cabaret style with the audience seated at tables eating snacks. Our thanks to Jill and Phil at he Quaker Rooms for all their support in putting this production on. Our second performance was to the Hungate Methodist Ladies Fellowship and our third and only public performance was in St Benet's Church Hall, also cabaret style. Our final performance was in the Blyburgate Hall to the elderly folk at the Sunday Club. This was the most energetic performance with cast members using both stage and floor area and really working their audience.

In December 2011 Fusion performed a musical adaptation of Charles Dickens' A Christmas Carol to three enthusiastic audiences. First to our regular audience of elderly people at the Sunday Club, then to a group of parishioners at Saxlingham Nethergate Church and finally a public show at the Blyburgate Hall which was a full house of around 80 people! We are delighted to report that not only did the children perform BRILLIANTLY, but in total we raised £600 through donations for the Bulgarian Orphans. This was a fantastic achievement. The only way is up for Fusion!!!!!

In June 2012 a cast of 21 children performed an epic version of Wind in the Willows at the Blyburgate Hall, raising another £400 for Bulgarian Orphans Fund.
Are you being Served? written by Hilary was a play set in a café poking fun at café culture, yummy mummies and the world of social media.  Real croissants, muffins and Cornish pasties were consumed on stage, much to the cast's delight.
'Keeping up with the Joneses' was the sequel: another comedy written by Hilary featuring two very different families, the Skippers and the Joneses and all the dramas of a wedding preparation including a talking satnav and a Mercedes.
For Christmas we got a more serious with Backstage, a gritty original play set in a theatre due for demolition, opening with a protest march to the tune of Queen's 'The Show must go on'. At Easter 2014 we produced Learning the Hard Way set in a school with eccentric teachers and rebellious pupils.
July 2014 saw our first combined performance 'The Big Sing' involving all four of our children's Fusion groups performing Comedy in Camelot.
In December 2014 we grew to five children's groups totally 60 children in all, plus 10 adults from Waveney Enterprises. The children's groups are working on Robin Hood.


Fusion welcomes and nurtures members of all ages. Only 100% enthusiasm required!


Here is a list of productions that Fusion's indepndent groups have put on:
(* = original material written by us)


Fusion Enterprise (in collaboration with Waveney Enterprises) have produced:


Email us for more information or to book your FREE trial rehearsal: hillyharrison@gmail.com
or follow us on Facebook #Hilary Harrison